The morning breakfast show is called Uno Mattina [sic]. It’s quite a serious show. No comfy sofas or flower arrangements. Every morning I try to keep up with the interviews and news reports with varying success. I’ve come to realise that it’s not always my limited understanding. Some people just talk clearer than others and this makes me feel a tiny bit less inadequate. This morning I had a small breakthrough as I understood Prime Minister Monti’s comments on the US election and what it means for Europe.  It helped that he spoke very very slowly.

What I’ve still to understand is why the weather man is dressed like this every morning. 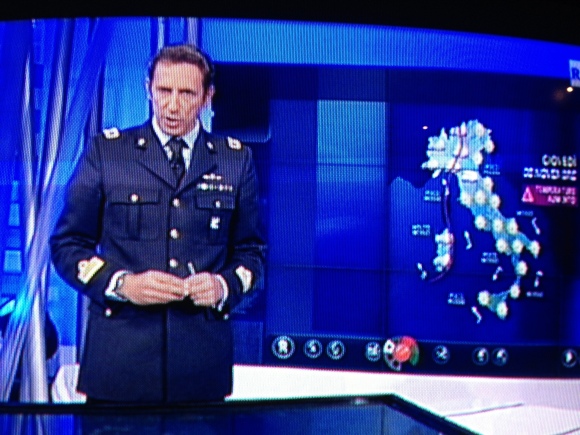 Here’s today’s breakfast. It’s called il Buccellato and it’s the most typical and famous bread in Lucca. The saying goes “Chi va a Lucca e non mangia il Buccellato è come se non ci fosse stato” which means going to Lucca and not eating the Buccellato is like never being there.

Il Buccellato is either straight like this one or made in a ring. It’s basically a fruit bread but the actual ingredients are closely guarded and recipes are passed from generation to generation with great secrecy.

It’s very versatile. It’s mostly eaten like a cake either plain or toasted, or cut into thick slices and dunked in wine, or soaked in Vin Santo and layered with cream and strawberries. It’s only 9am so probably too early to try that.  Maybe later.